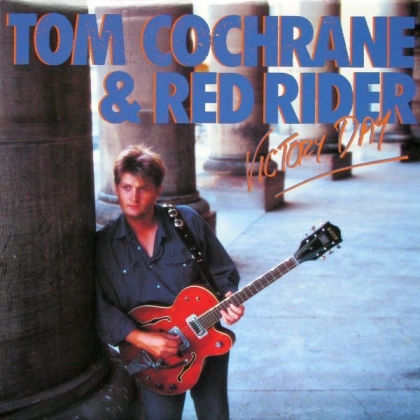 Twenty-five years ago today—on March 2, 1989—Tom Cochrane and Red Rider played the Orpheum with guests the Northern Pikes, a band from Saskatoon that I liked almost as much as the headliner.

Red Rider was touring behind its latest album, Victory Day, which featured the singles “Good Times”, “Big League”, and the title track. This was two years before Cochrane would hit solid freakin’ gold with his most famous song, “Life is a Highway”, but Victory Day did quite well, going double-platinum in Canada.

Here’s my review of the show from the following week’s Straight.

It used to seem that nearly all the best rock ‘n’ roll bands came from either Britain or the U.S. Then came the Aussie invasion. Now, it’s Canada’s turn.

WIth killer acts like Jeff Healey, Blue Rodeo, Colin James, Art Bergmann, the Pursuit of Happiness, the Northern Pikes, and Tom Cochrane and Red Rider coming on strong, Canuckville is a world-class contender. Fans of the latter two bands recently had a chance at the Orpheum to see just how potent Canadian rock can be.

After a sell-out show on Tuesday (February 28), Cochrane and his band returned to cram the Orpheum again two nights later—their last show with the Pikes as opening act. As a send-off prank, the Red Rider crew dangled a big plastic shark over the stage, and had it do a little jig while the Pikes played “Dancing in a Dance Club”. When they noticed the plastic predator, the band members seemed genuinely distracted, but not enough to stop churning out precise renditions of crafty pop-rock tunes from their last two albums, Big Blue Sky and Secrets of the Alibi.

When Cochrane and Red Rider followed, they focused on their last two LPs as well, but also thrilled long-time fans with their first hit, “White Hot”, and several tracks from 1983′s Neruda album. In introducing his latest single, “Good Times”, Cochrane explained that it’s “a song about getting lucky for the first time…beside a lake…in Northern Canada.” It had definite autobiographical overtones.

As well as his own tunes, Cochrane mellowed out on Leonard Cohen’s “Bird on a Wire” before the Northern Pikes got him back for the shark attack by sending a pizza boy on stage to deliver and collect. The four Pikes then appeared to jam along on the rollicking “Citizen Cain”.

During Cochrane’s biggest hit, “Boy Inside the Man”, the whole right side of the P.A. cut out, and the normally cool singer lost it for a minute, furiously swinging the band’s monitors to face the crowd, and then tossing down his acoustic guitar.

But quick-thinking roadies got the sound system working again, and the band encored with a righteous version of Cochrane’s super tune, “Love Under Fire”.