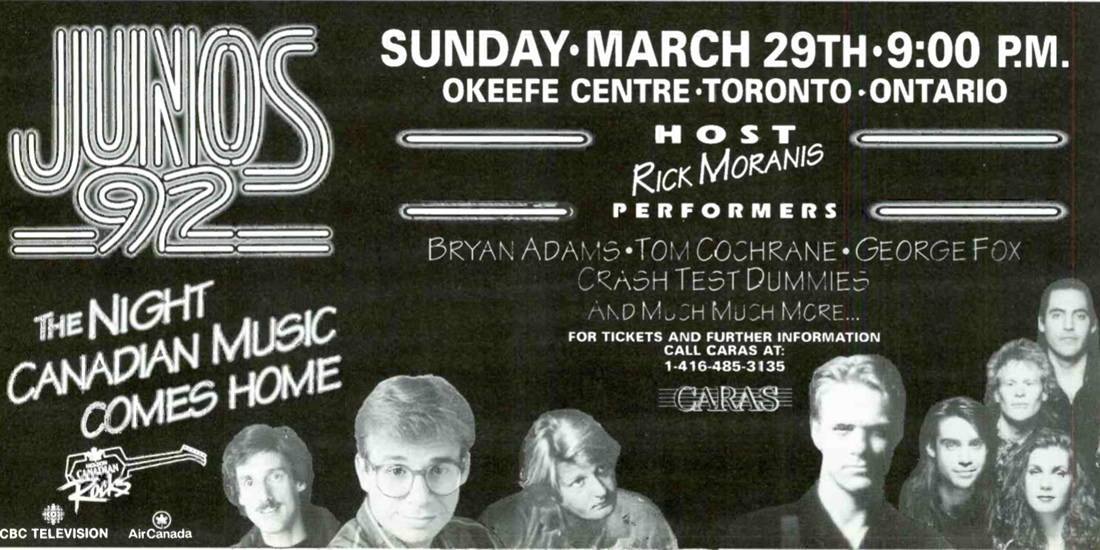 TORONTO–Ending recent rumors that Bryan Adams would not be appearing on the televised Juno Awards show, the Canadian Academy of Recording Arts and Sciences has announced he will perform at the upcoming 21st annual ceremony March 29 here.

Adams’ manager, Bruce Allen, had indicated several times earlier that the Vancouver-based performer might boycott the awards over his dissatisfaction with the Canadian Radio-television and Telecommunications Commission’s controversial ruling last fall that the songs on his current A&M album, “Waking Up The Neighbours,” did not satisfy Canadiancontent regulations. Adams will, however, miss the Grammy Awards Feb. 25 in New York due to tour commitments in Japan.

The Canadian presentation will be hosted by film star and former CHUM announcer Rick Moranis, Tom Cochrane, Crash Test Dummies, and country singer George Fox, who will also entertain. Additional performers will be named at a later date, including those participating in a tribute to the folk/country duo Ian & Sylvia, which is being inducted into the Hall of Fame.

“We don’t follow the Canadian-content guidelines prescribed by the CRTC,” says Peter Steinmetz, president of the 1,400-member CARAS organization and executive producer of the event, explaining how Adams’ songs on “Waking Up The Neighbours” are eligible for the Junos under CARAS rules. “We find them restrictive. They regulate what broadcasters do and play; our academy promotes and congratulates excellence of achievement by Canadians. Could you imagine the Juno Awards with Bryan Adams not qualifying in several of the categories? I couldn’t.”

Though Adams leads the pack of Juno nominees with six nominations in 33 categories, and “Waking Up The Neighbours” has chalked up domestic sales of some 550,000 units to date, the West Coast rocker is not a guaranteed shoo-in to sweep the awards. He is squarely head-to-head against five-time nominated singer/songwriter Cochrane in the album-ofthe-year, single-of-the-year, male-vocalist, songwriter, and producer categories. Though Adams has received sizable international stature in the past year, veteran Cochrane, with his “Mad Mad World” album notching up sales of 425,000 units to date, has been a big sales winner for Capitol-EMI Records Canada.

In a seeming Juno mishap, Toronto-based Cochrane, however, is excluded from the award for entertainer of the year, which has Adams, Blue Rodeo, Celine Dion, Colin James, and the Tragically Hip competing. Considering the heavily publicized competition between Cochrane and Adams for chart dominance throughout the fall, the omission is glaring. “It’s one of those areas which we are going to re-examine our cutoff dates,” concedes Steinmetz.

Another seeming omission is the Crash Test Dummies’ “Superman’s Song,” one of the most played Canadian tracks of the year, from the single-of-the-year category. Since the song was not released as a single to the public, a common occurrence today, it was not eligible for submission. The group, however, is represented in the best group, album, video, and album-design categories.

A number of categories promise a good fight Juno night. Among them are group of the year, which pits veteran act Rush against last year’s winner, Blue Rodeo, as well as Glass Tiger, the Tragically Hip, and the Crash Test Dummies; the rap-recording-of-the-year category, in which Maestro Fresh-Wes, Michie Mee & L.A. Luv, Dream Warriors, Kish, and Simply Majestic (featuring the Brothers From The Ghetto with Frank Morell) are competing; and the songwriter-of-the-year category, in which Bruce Cockburn, Shirley Eikhard, and Marc Jordan will try to knock off front-runners Cochrane and Adams.

With sizable cutbacks within the Canadian Broadcasting Corp. this past year, the upcoming Junos will likely be toned down from last year’s Vancouver affair in which the British Columbia provincial government kicked in additional funding to defray costs of holding the awards outside Toronto for the first time. “We had a great time working in Vancouver last year but I’m happy to be back home at the O’Keefe Center,” admits Juno producer Lynn Harvey, who has co-ordinated the past three presentations. “It’s easier when everything is just half a mile away.”