In America, Tom Cochrane is primarily known for the smash single “Life Is A Highway” (also covered by country group Rascal Flatts), and for those who dig a little deeper, the leader of Canadian rock band Red Rider (responsible for the lost ‘80s treasure “Lunatic Fringe”). However, in the singer/songwriter’s home country, he’s at least as big as Bryan Adams, has a massive trophy case full of Juno Awards (their Grammy equivalent), a spot in the Canadian Music Hall Of Fame, a star on the Walk Of Fame and even a stretch of the interstate named after his signature song.

Of course, Tom Cochrane would be driving in an entirely different lane not that far into the future, and as the harmonica-laced “Life Is A Highway” indicated, he choose the correct course for a prolific career that deserves more Stateside attention than it’s received thus far. 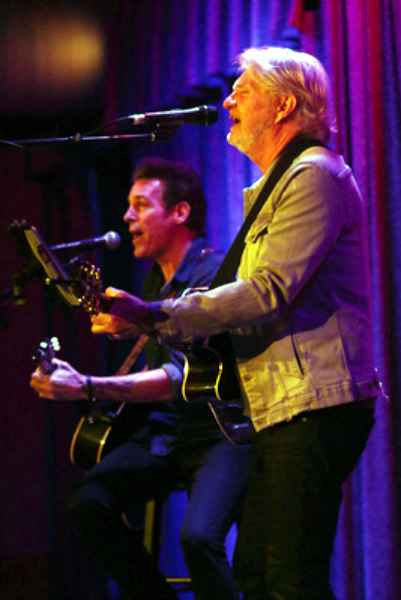 Though he doesn’t draw massive audiences in this portion of North America, those who came to the intimate and comfy City Winery can confirm Cochrane is well worth knowing about, and for nearly two hours, they were treated to tunes that don’t get nearly enough airplay down here. After nestling into unplugged editions of “Boy Inside The Man,” “Human Race” and “Napoleon Sheds His Skin” with a second acoustic guitarist, the headliner remarked how his best-selling project “Mad Mad World” recently turned 25 and was reissued with a bonus disc of concert material cut at the Windy City’s very own Park West.

“We all have that self-deprecating sense of humor and don’t put up with any s***,” he joked at one point when drawing similarities between Chicagoans and Canadians. And it turns out his narratives frequently drew upon those elements, often times placed within working class environments or pages from his personal diary.

“The Untouchable One” went out to the strong women of the world, “Big League” talked about dream-seeking in spite of less-than-ideal circumstances and Leonard Cohen’s “Bird On A Wire” was framed around a hysterical story of a completely broke Cochrane abandoning the cab he drove prior to becoming a rock star to hear the late poet perform through an open venue door. Of course, he’d be driving in an entirely different lane not that far into the future, and as the harmonica-laced “Life Is A Highway” indicated, he choose the correct course for a prolific career that deserves more Stateside attention than it’s received thus far.