Tom Cochrane and Red Rider at The Abbotsford Center

Tom Cochrane’s Mad Mad World album has turned 25 and Tom’s way of celebrating is to get the boys from Red Rider back together and tour.  It’s a current trend these days and Tom is no stranger to either touring or celebrating milestones.  A seven-time Juno award winner, Cochrane is very well established as an icon in Canadian music.  This album, and the mega-hit ‘Life is a Highway’ in particular, has earned Diamond-certified status and is only one of three men in Canadian history to do so.  Order of Manitoba, Order of Canada, Canadian Hall of Fame, Grammy nomination, countless songwriter awards…yes, he’s entitled to take a victory lap with this one and the fans have turned out on this blustery winter night to celebrate these songs with him.

Tom has chosen well with the opening performer.  Meghan Patrick is a true Canadian girl that can write and sing, or shoot and field dress a deer.  Patrick is a fantastic choice to open the concert as she joins the tour tonight, and perfectly timed.  Her first hit single to crack the top ten on the Canadian country charts, ‘Still Loving you’ is personal.  It’s a song she wrote and features American country star Joe Nichols.  She performs it with her bass player this night and this song really showcases her beautiful voice.  But she doesn’t just floor you with her voice.  Meghan plays both acoustic,  electric guitar and banjo very well, and if your ears haven’t sold you, your eyes will. Long tanned legs, long blonde curls, and a killer smile.  She is the complete package and has a very bright future.  Her current album ‘Grace and Grit’ has some major names helping out from Chad Kroeger to Vince Gill, Chantal Kreviazuk, and local girl Carley McKillip. 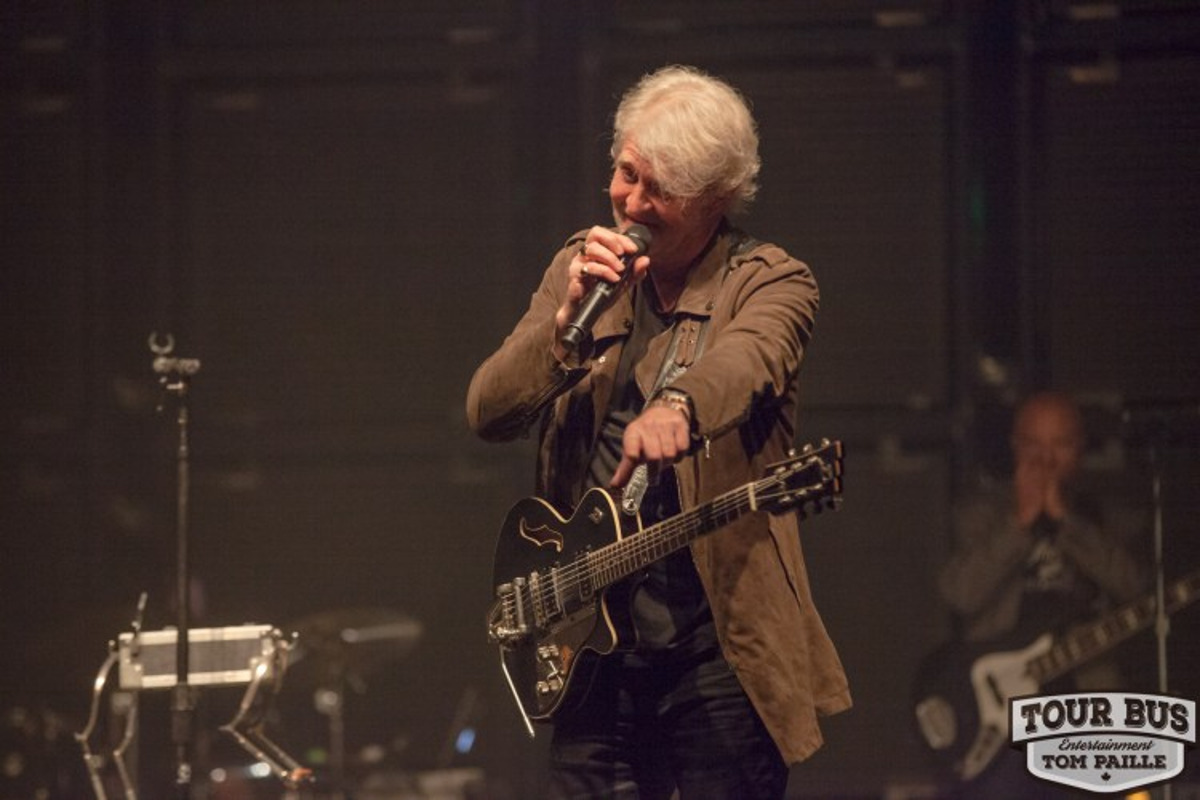 Tom and most of the original Red Rider band take the stage to a crowd buzzing in anticipation.  A single spotlight from above silhouettes Tom in a wash of blue light.  The sellout crowd explodes, and the boys dive into “Mad Mad World’.  The Abbotsford Center holds about 7000 but the stage configuration tonight will seat around 4000.  Each one of those seats is now empty as the crowd rises to greet this Canadian superstar.  The album will be played in its entirety tonight but there is a mix of favourites that, as Tom says, “I can’t not play these ones. We love them so much”.  Yes, we do!  As a teen, I have a vivid memory of my manager at McDonalds’ coming into the crew room saying “You guys gotta hear this!”  He puts a record on the turntable, drops the needle on ‘White Hot’ and I was hooked. I’ve gone through three copies of that vinyl before Red Rider released the ‘Over 60 Minutes with Red Rider’ cd.  I was a huge fan. HUGE.

So the songs of this Juno-winning album keep coming, from ‘Brave and Crazy’ to ‘Bigger Man’ and even ‘The Secret is to Know When to Stop’ which was not included in the first two nights of the tour (which started on Vancouver Island).  The mood is nostalgic and magical. It is also patriotic because Tom loves his home country and is never ashamed to let you know.  Growing up in ‘a small, northern town’ in rural Manitoba and making his way through the bars and clubs of this country trying to get a break in the industry, Tom gained a love of Canada and it’s place in the world.  He embodies the Canadian characteristics in his strong humanitarian beliefs and support of free speech for everyone, including journalism which can be seen in several Red Rider songs like ‘White Hot’. 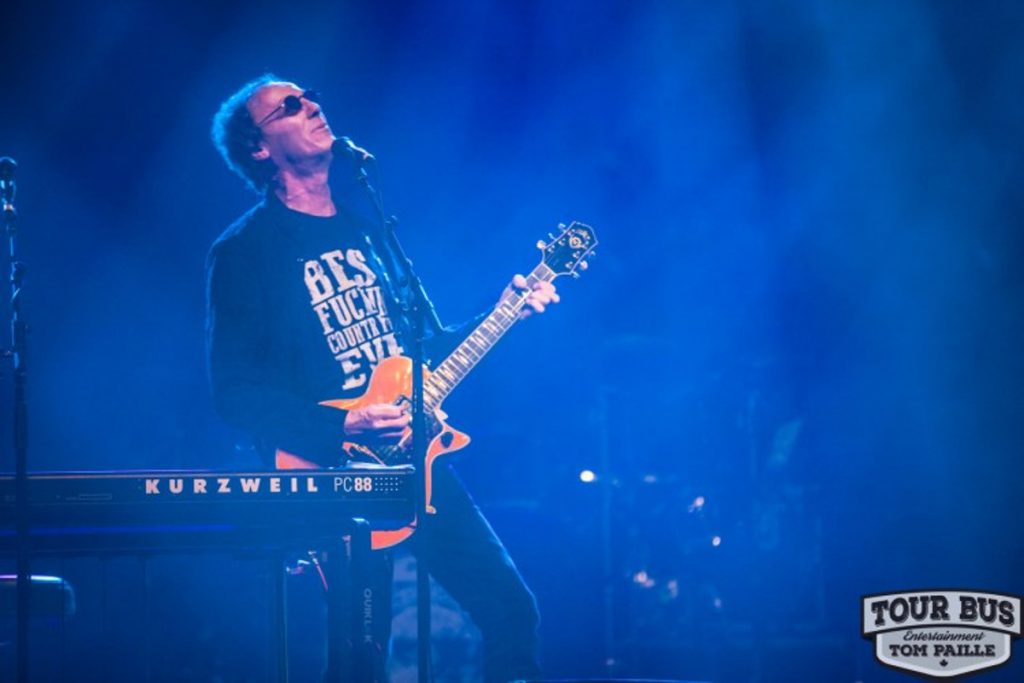 Meghan Patrick makes her return to the stage to join the band in a few ‘road songs’ that eventually lead to ‘Life is a Highway’.   This song took Tom into the stratosphere on the world stage and never disappoints.  Everyone is belting it out at full volume and Tom is letting every section have a turn with the chorus lyrics.  Large beach balls bounce overtop the floor seating which just adds to the party atmosphere.  As the song fades, Meghan exits, the lights dim and the ‘album’ is complete.

A drum beat starts.  Red Rider’s classic intro ‘Light in the Tunnel’ is the perfect showcase for Kenny Greer’s outstanding steel pedal guitar skills. Haunting and attention-grabbing.  The remaining songs in the set are Red Rider classics and when Tom introduces ‘Big League’ it becomes very emotional.  This song strikes a chord with many thousands of fans that either had kids that played hockey and dreamed of the ‘big leagues’ or played themselves. There are so many layers of meaning in the song and is no wonder so many love it.  ‘Lunatic Fringe’ and ‘White Hot’ end an emotional and memory-filled evening.  But wait…the encore! 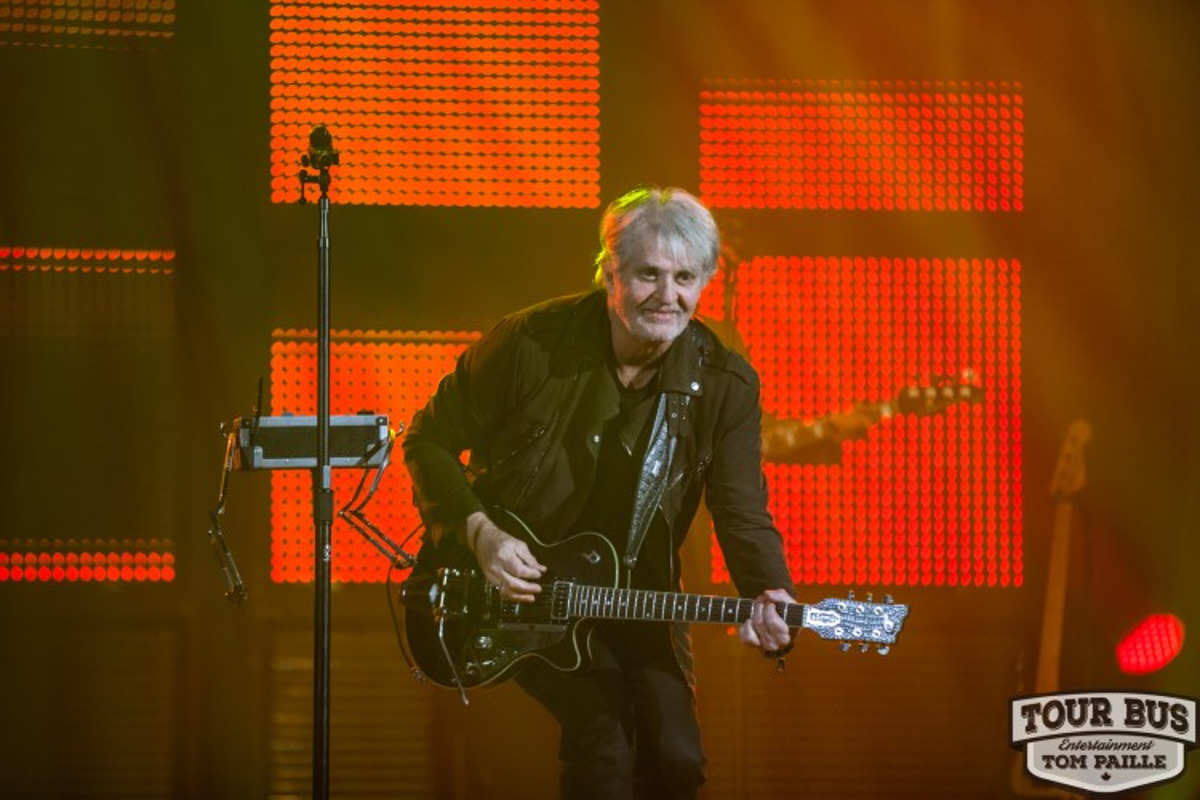 The Encore to a Mad Mad Show

Tom Cochrane comes back to center stage with an acoustic guitar and acknowledges the applause, cheers, and general madness.  Kenny Greer joins him and the two play ‘Good Times’ brilliantly.  The rest of the band rejoin onstage for on last song, ‘Boy Inside the Man’.  The mandolin starts and everyone claps and stomps along.  I’m in heaven as this was my ‘theme song’ for many years.  A perfect ending to an amazing evening…and even the rain stopped outside.