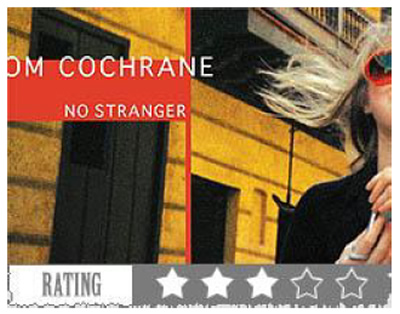 Cochrane comes out of hiding

If Tom Cochrane’s life really is a highway, he’s been at a rest stop for most of a decade. But he — and we — can thank Sam Roberts for getting him back in the driver’s seat.

According to Cochrane, new CanRock king Roberts urged him to record again after inducting him into the Canadian Rock Hall of Fame a few years ago. Cochrane took the bait — and the result is No Stranger, his first album since 1999.

That title seems ironic, but it’s on the money; Cochrane may have kept a low profile, but his dusty vocals and mellow heartland rock remain instantly familiar. Thing is, some fans may find this 45-minute set (in stores Tuesday) a little too mellow for its own good.

Tom and his band — including former Red Rider partner Ken Greer on pedal steel — don’t break much of a sweat on these dozen songs. Apart from a few token rockers — the Neil Youngish The Party’s Not Over, the darkly shuffling Since U Left Me and a suitably fuzzy cover of Spirit in the Sky — Cochrane and co. stick to quiet, restrained fare like the shimmering U2ish ballad White Horse and the midtempo Rough and Tumble, a tribute to peacekeepers in Afghanistan. Granted, it’s swell to have Tom behind the wheel again.

But maybe Sam could convince him to shift into second gear on his next album.