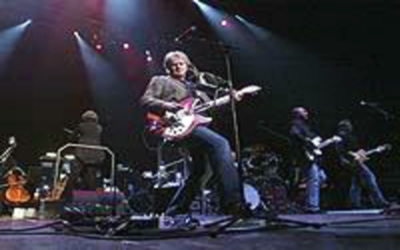 He’s probably more comfortable in an old T-shirt and tattered blue jeans, but Manitoba’s own Tom Cochrane had no problem rockin’ the suit-and-tie set last night.

Playing to some 950 dignitaries gathered for a Grey Cup gala dinner at MTS Centre (plus about 800 more who showed up just for the show), Cochrane, along with his old Red Rider buddies, did his home province proud. Of course, he got a little help in classing things up from another local institution, the Winnipeg Symphony Orchestra, the sweeping accompaniment and full-bodied sound of which was the perfect foil for Cochrane’s grandiose rock anthems.

Playing first to a clip reel of Grey Cup highlights, the WSO segued smoothly from a few stirring classical charts (among them Wagner’s Ride of the Valkyries) to the opening strains of Red Rider’s Avenue A. In no time, Tom himself was standing centre stage with an acoustic guitar, his raspy, well-worn voice rising and falling as the symphony’s string section played duck-and-weave in the background.

Following that song, a few more stage lights were lit to reveal the rest of Red Rider, and after sharing a few football memories, the boys launched into the sports appropriate Big Leagues.

Next up was The Party’s Not Over, from Cochrane’s latest solo disc No Stranger.

Cochrane dedicated Rough and Tumble, a song inspired by Canadian hockey heroes and smalltown soldiers, to any members of the military in the audience.

By press time, Cochrane (who was born in Lynn Lake) had yet to tuck into his best-known hit, the hard-rocking travelogue Life Is A Highway. We have a sneaking suspicion he played it, however, especially since it afforded such a perfect opportunity to remind everyone that — this weekend, anyway — all roads lead to Winnipeg.

And with that in mind, have a great game, a great weekend and a great Grey Cup, everyone. Now let’s get out there and knock some heads.