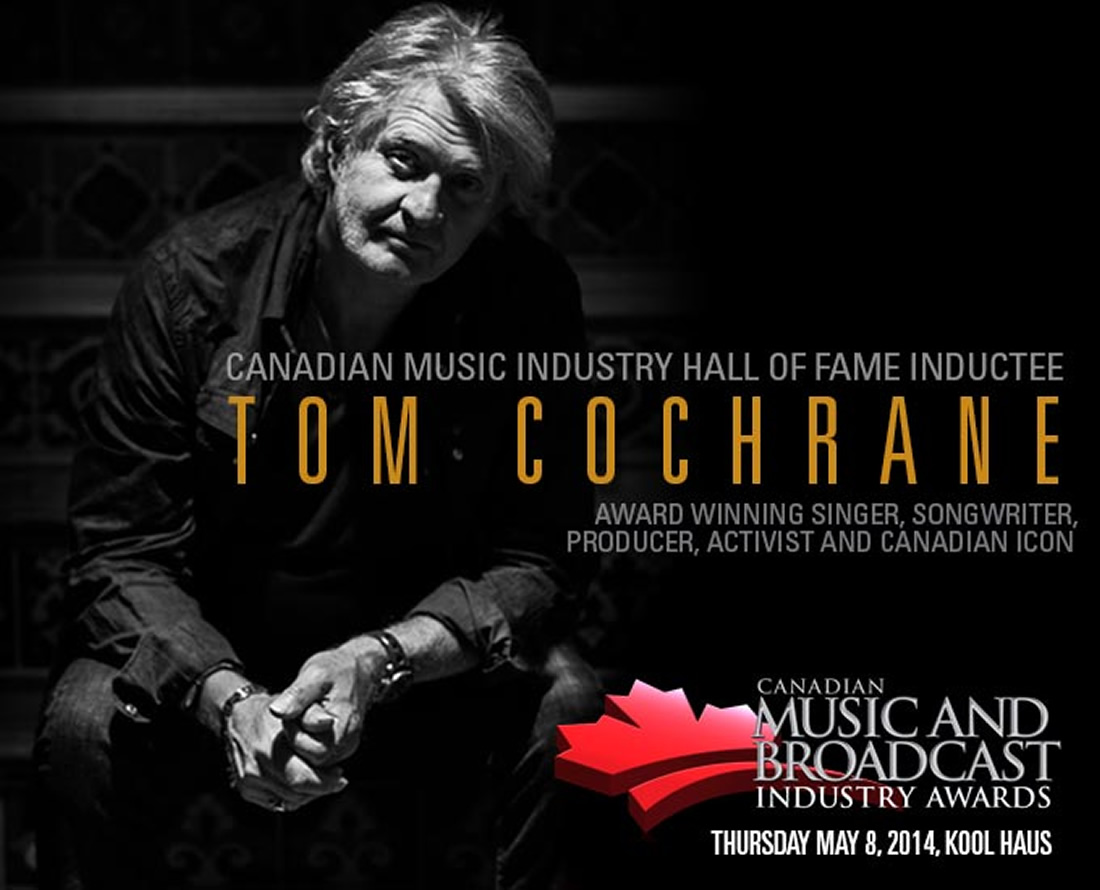 TORONTO, ON – (February 28, 2014) – Canadian Music Week is pleased to announce Tom Cochrane as a 2014 inductee to the Canadian Music Industry Hall of Fame.  Cochrane is an award winning singer, songwriter, producer, activist and Canadian icon, and will be honoured amongst his peers at the Canadian Music & Broadcast Industry Awards gala, taking place on Thursday, May 8, 2014 at the Kool Haus in Toronto.

“For decades, Tom Cochrane has been admired and recognized as one of Canada’s treasured musical icons,” said Neill Dixon, President of Canadian Music Week.  “His songs have resonated through our history, enriched our heritage and have defined a generation of music that helped bring Canada to the forefront. Above that, his tireless support of humanitarian causes has been an inspiration to many. We are proud to recognize his achievements and celebrate his career with this induction to the Canadian Music Industry Hall of Fame.”

Tom Cochrane is well acquainted with the transformative power of music. Songs that draw from the wellspring of human emotions have been his stock in trade for more than 30 years. From his origins as a Yorkville folkie to his heyday as a stadium rocker, the Canadian music legend has always stayed true to his belief that performers have an almost sacred responsibility to their community that cannot be taken lightly.

“Music is a trust between the artist and the audience,” says Cochrane. “It’s something that validates the idea that there is a human spirit, a force that really can change the world.”

Changing the world is something Tom Cochrane hasn’t shied away from. A charitable figure in Canadian music, Cochrane has worked for years supporting organizations such as Amnesty International, War Child and WSPA, and has used his music to help worthy causes such as tsunami relief and Parkinson’s research. His association with World Vision is perhaps his most notable, having travelled to Africa and Asia several times to support its work.

Tom Cochrane has penned such classic songs as “Life is a Highway” and “Big League”, always delivering a uniquely Canadian Perspective through his lyrics. His career has been punctuated with several major chart successes: his time with Red Rider produced memorable hits such as “White Hot” and “Lunatic Fringe,” a song which went on to become one of the most played songs in American Rock radio history. Released in 1991, his album Mad Mad World had over two million in sales worldwide, making it one of the biggest-selling Canadian records of all time, and his 1995 single, “I Wish You Well,” broke Canadian records as it hit #1 upon entry in both the single and air play charts.

A long and fascinating career characterized by creative adventurousness, and musical and personal integrity make Tom Cochrane a highly deserving inductee into the JUNO Awards Canadian Music Hall of Fame, the Canadian Walk of Fame, an Officer of The Order of Canada and the winner of eight Juno awards, including the Allan Waters Humanitarian Award.

To attend the Canadian Music and Broadcast Industry Awards or for additional details visit: http://cmw.net/awards/music-broadcast-industry-awards/

About Canadian Music Week Canadian Music Week is Canada’s leading annual entertainment event dedicated to the expression and growth of the country’s music, media and entertainment industries.  Combining three information-intensive conferences; a trade exposition; a film festival; a comedy festival; four awards shows and the nation’s largest new music festival, CMW spans a five-day period from May 6 to May 10, 2014 at the Toronto Marriott Downtown Eaton Centre Hotel and over 60 downtown Toronto venues, attracting participants from across the globe.  For more information, visit www.cmw.net.