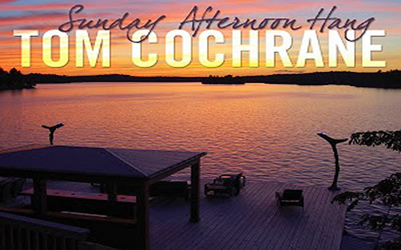 Tom Cochrane tells FYI that his forthcoming album featuring the single “Sunday Afternoon Hang,” – is about a “mythical hobo musician’s journey” and incorporates blues, country, rock n’ roll with a few “epic ballads” like “Pink Time”, “The One That I Have Known” and “A Prayer For Hope.”

Set for release in late October through Universal Music, it is his first since the ’09 release of No Stranger. Following that album’s release, the celebrated 7X Juno winner slipped into semi-retirement, playing sporadically and often times using his celebrity status to raise awareness of and funds for a variety of charitable organizations he supports.

Simultaneous with the release of the new single, Cochrane has aligned himself with Union Entertainment Group which also handles Nickelback, Dallas Smith, and Florida Georgia Line. In the Monday edition, FYI noted that signing on with the management firm suggested a renewed commitment to touring and getting back into the game.

By e-mail, he writes, “Funny you should say back in the game because I have a song called that on the record and we will probably call the album Back in the Game.”

He is now in possession of two separate mixes of the album. Tracks were recorded in LA, at his home studio in Muskoka and at Metalworks in Toronto.

Splitting his time between his summer home and Austin, TX, he says, “I am a diehard Canadian with my primary residence in Canada but living in Austin part time has left an indelible imprint on many of the songs. I guess the record leans towards outlaw country in a sense, with a few strong blues and swing elements.”

He adds, “In a world where people don’t tend to listen to whole albums I hope they will with this, but I am and always will be a dreamer so why change now.

“I needed to do this record much like birds have to fly south then north again; it is an instinct and an urge that cannot be ignored”