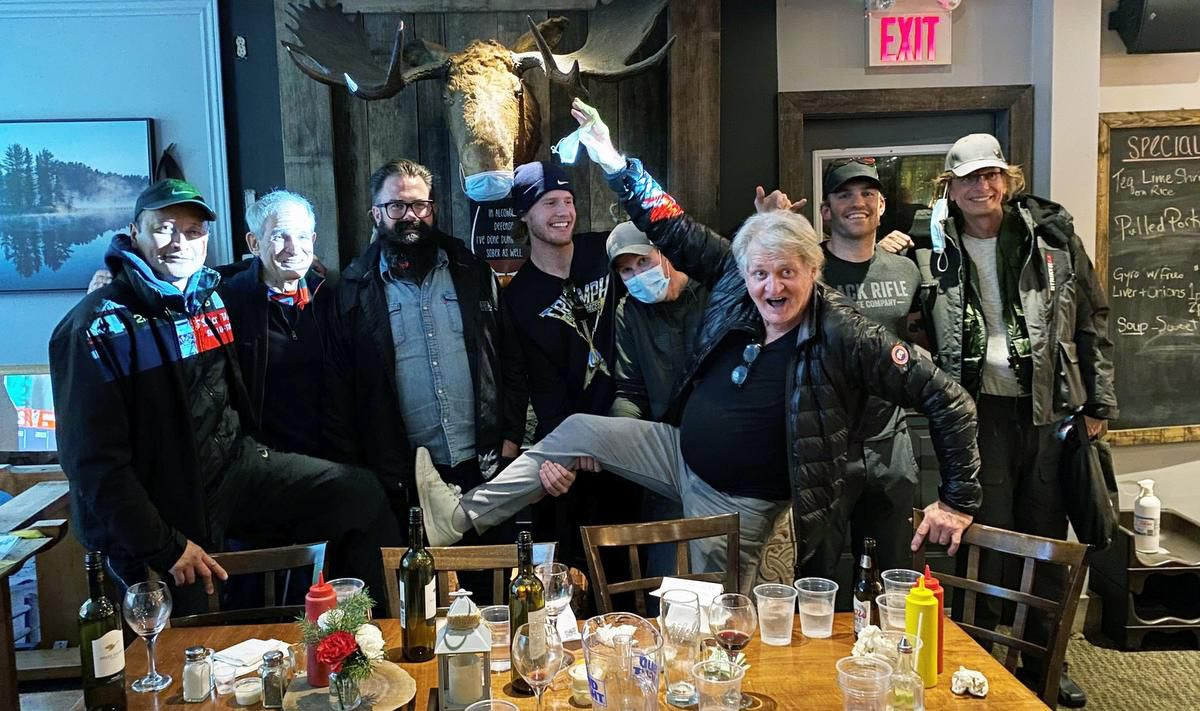 Daniel Reid, co-owner of the Bobcaygeon Inn restaurant, said they weren’t expecting Cochrane, they just knew they had a reservation for a table in front of the fireplace on Nov. 6.

Reid said he was sanitizing the table when Cochrane, the first to arrive, showed up by himself, but Reid didn’t yet recognize him with his mask on.

Cochrane walked over to the table, standing on the opposite side of it as Reid, and told Reid he liked his mask, Reid said.

“As I finished sanitizing the table, he’s about to sit down and he took off his mask and goes, ‘Hi, I’m Tom,’ and I just looked up and went, ‘Of course you are,’ and then it hit me like, ‘Oh, this is Tom Cochrane,’” Reid said.

“At that point I didn’t want to make a big deal out of it, I wanted him to enjoy his dinner, so we just left him alone, but by the end of the dinner, everyone in the restaurant sort of knew it was Tom Cochrane sitting there.”

Though, while calm on the outside, on the inside, Reid said he was really excited.

“I mean, this is a Canadian music star and I’m a big music guy, so having that guy standing in front of you, you’re sort of in awe,” he said.

Reid said he’s a big fan of Cochrane. “I mean, I don’t have all of his records, but when his music’s on I’m usually turning it up. And I’ll play Tom’s music at our patio,” he said.

Cochrane was supposedly in the area fishing and came to dine at the inn with seven others, including Gil Moore, the drummer and vocalist of Canadian rock trio Triumph, Reid said.

Cochrane posed for a photo at the table. Those in the picture were individuals who were sitting at the same table as Cochrane, Reid said.

Reid said in the past year-and-a-half that him and his wife have owned the inn, they’ve had other celebrities such as legendary CHUM-FM morning host Roger Ashby (who has a cottage in the area), singer-songwriter Neil Young’s brother Gord (who lives in the Omemee area) and a couple of famous fishermen stop by and have a meal at their restaurant.

“You hear about all of these people that have cottages up here and you sort of hope one day some of them will pop by, but I don’t even think Tom has a place up here,” Reid said.

According to Reid, their restaurant has the largest waterfront patio in the Kawarthas. He said he hopes Cochrane will come back next summer to enjoy it.

Marissa Lentz is a staff reporter at the Examiner, based in Peterborough. Her reporting is funded by the Canadian government through its Local Journalism Initiative. Reach her via email: mlentz@peterboroughdaily.com