Tom Cochrane Has Stretch Of Manitoba Highway Named After Him 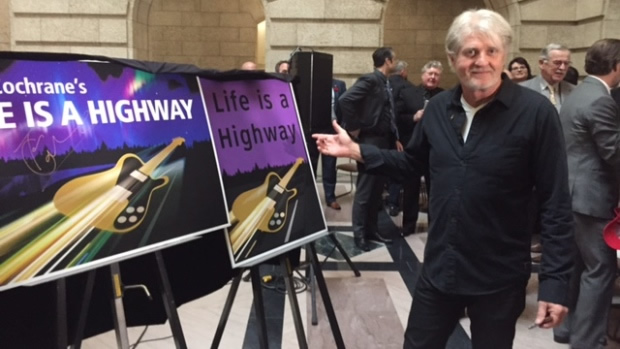 Singer-songwriter Tom Cochrane shows off new highway placards unveiled at the Manitoba Legislature in Winnipeg on Monday to honour him and his 1991 hit song, Life is a Highway. (Sean Kavanagh/CBC)

He’s known for his hit song Life is a Highway, and now Tom Cochrane has a highway in northern Manitoba named after him and his famous tune.

The Manitoba government is naming a 322-kilometre section of Provincial Road 391, between Lynn Lake and Thompson, Tom Cochrane’s Life Is A Highway, after the multiple Juno Award-winning rock musician and his 1991 popular single.

Cochrane, 63, who was born and raised in Lynn Lake, was on hand as Premier Brian Pallister and Infrastructure Minister Blaine Pederson showed off placards with the new highway name at the legislative building in Winnipeg on Monday morning.
“That’s incredible,” Cochrane said as the signs were unveiled, before he performed an acoustic set that included Life is a Highway.

Lynn Lake Mayor James Lindsay described Cochrane as “Lynn Lake’s most famous resident,” while the rock star praised his hometown and province. “It’s something that sticks with you,” Cochrane said, when asked about “Lynn.” “You can leave Manitoba, but it never leaves you.”

Cochrane has been performing since the 1970s, but he stepped into the limelight with his massively successful single Life is a Highway from his album Mad, Mad World, which was released 25 years ago. Over the years, he has used his celebrity status for a number of humanitarian causes, including Elizabeth’s Concerts of Hope (ALS) and World Vision. Will play in Lynn Lake in August
Cochrane said Monday that he’ll perform in Lynn Lake — located about 815 kilometres by air northwest of Winnipeg — on Aug. 20, 2017, as part of his Mad, Mad World 25th anniversary tour. 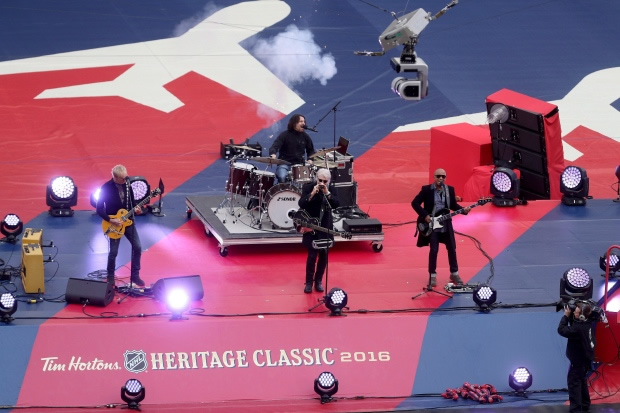 Tom Cochrane performs during the first intermission as the Winnipeg Jets and Edmonton Oilers alumni teams face off at the NHL Heritage Classic in Winnipeg, Saturday, October 22, 2016. (Trevor Hagan/Canadian Press)

He praised Manitoba’s vibrant culture and arts scene and the toughness shown by people in the province.

“We don’t put up with a lot of nonsense in Manitoba.… We’re gritty,” he said.

“I love the people. It’s kind of etched on my soul and let’s face it, some of the greatest musicians in the world come from here.”

Cochrane has received a variety of honours, including eight Juno Awards in total and a Grammy nomination in 1993 for Life is a Highway, which topped the Canadian music charts and reached No. 6 on the Billboard Hot 100 in the United States.

He was awarded the key to the city of Winnipeg in June 2012, in part to recognize his efforts to raise money for ALS patient support and research. He was named to the Order of Manitoba in 2015 and was inducted into the Canadian Walk of Fame in 2005 and the Canadian Music Hall of Fame in 2003.

Most recently, Cochrane performed at the NHL Heritage Classic and alumni game at Investors Group Field on Oct. 22-23.